Marsh’s cell phone could have provided evidence of who he was in communication with in the moments before and while the crew moved from its safety zone in a burned over area on the eastern ridge of the Weaver Mountains west of Yarnell and into a chaparral-choked box canyon where the men were trapped by a wall of flames.

MacKenzie’s camera included video clips of a crucial discussion between Marsh and Granite Mountain Captain Jesse Steed that suggests a disagreement over tactics before the crew left the “black”, burned-over area.

The autopsy records were only recently released after Yavapai County Attorney Sheila Polk refused repeated media requests under the Arizona Public Records Law for the reports in the months immediately after the fire. Polk said in August 2013 that the privacy interests of the families of the fallen firefighters exceeded the public’s right to examine the reports.

InvestigativeMEDIA obtained the reports in October. The autopsy reports were released four months after all litigation filed by the families of hotshots seeking $237 million in damages from the state Forestry Division and the Central Yavapai (County) Fire District had been settled.

Dr. Philip Keen, the former chief medical examiner for Yavapai and Maricopa counties, said Monday law enforcement determines what personal items accompanying bodies should be collected for evidence and what should be released to funeral homes, which then provide the personal belongings to relatives.

YCSO deputy Joshua Nelson collected cell phones that arrived at the medical examiner’s office from the personal items of two other hotshots and the cell phones were subsequently identified as evidence, according to autopsy records. On July 4, 2013, three other YCSO personnel went through the personal property of each firefighter at the medical examiner’s office, YCSO records show.

“The only items that were separated from the personal belongings were cell phones,” the July 16, 2013 report prepared by YCSO Detective J. McDormett states. “Data down loads will be attempted for the state investigators and the phones will then be returned to the fire department and eventually the families.”

YCSO Lieutenant Boelts and technician John File accompanied McDormett when the cell phones were reportedly separated from the personnel belongings for each hotshot, the report states.

But Marsh’s cell phone and McKenzie’s still working camera — although not a cell phone but clearly important because of the photos and videos of the fire — were not included in the evidence collected by the YCSO.

Lieutenant Boelts said Monday that he was at the medical examiners office when the autopsies were performed but that he didn’t observe the autopsies. “I was there in an administrative role,” he said.

Lieutenant Boelts said he doesn’t know anything about what happened to Marsh’s cell phone or MacKenzie’s camera. He said he wasn’t going to respond to Keen’s description of the cell phone and camera not moving into evidence as “fishy”.

The YCSO police report, however, states that on July 4, 2013 Lieutenant Boelts specifically prepared a “spreadsheet” that detailed items collected from each firefighter that were placed in plastic bags.

Lieutenant Boelts told InvestigativeMEDIA that Deputy Nelson picked up all the personal belongings of the firefighters and turned them over to the Prescott Fire Department.

The YCSO police report, however, states that McDermott and Lieutenant Boelts gave the firefighters’ personal items and the spreadsheet listing the items to Rob Zazueta of Chino Valley Fire Department on July 4, 2013.

Mike Molzhon, administrative services manager for the Office of the Maricopa County Medical Examiner, did not comment on why Marsh’s cell phone and MacKenzie’s camera did not appear as evidence.

Arizona Forestry Division spokesman Bill Boyd said Monday that the division doesn’t know why the evidence wasn’t forwarded to YCSO and subsequently to the investigation team and how that may have impacted the investigation.

“You’re going to have to talk to them (the Serious Accident Investigation Team),” Boyd said.

The forestry division signed an agreement to form the accident investigation team led by out-of-state experts on July 3, 2013 to review the conditions and events leading to the tragedy.

Messages left with the Florida Forest Service requesting an interview with Karels were not returned.

The broken chain-of-custody of two key pieces of evidence further undermines the integrity of the already roundly criticized investigation into the worse loss of life suffered by wild fire suppression teams, known as Interagency Hotshot Crews, since they were founded in 1946. Two Granite Mountain hotshots with saws on their shoulders shortly before 4 p.m., June 30, 2013 at the Yarnell Hill Fire. Photo by Christopher MacKenzie.

“If we are aware of two things like that, what else is there that nobody has seen?” asks Ted Putnam, a retired federal wildfire fatality investigator who participated in the investigation of the South Canyon Fire that killed 14 firefighters in Colorado in 1994.

“The basic question in my mind is why didn’t (SAIT investigators) ask for the cell phone records?” says Dick Mangan, a retired wildfire death investigator who participated in the South Canyon investigation and in the investigation of the 1990 Dude Fire in Arizona that killed six firefighters.

Mangan says if he had been conducting the Yarnell Hill Fire investigation he would have obtained the cell phone records of everyone on the fire.

“Who the hell was talking to who and at what time?“ he says. “(Checking) cell phone records in this day and age is basic.”

The cell phone eventually ended up in the possession of Marsh’s widow, Amanda, according to the Prescott Courier. Amanda Marsh declined a request for an interview and has in the past refused to provide copies of Marsh’s cell phone records from June 30, 2013.

Autopsy records for MacKenzie show a cell phone and a Canon camera were present in the body bag that contained MacKenzie’s remains. The autopsy report notes that the Canon S1400IS camera was still “working”.

The autopsy report, prepared by Dr. Christopher K. Poulos, does not include the camera or the cellphone under the heading “EVIDENCE”. Instead, Dr. Poulos states the evidence “includes a flame retardant pouch, one boot, one helmet, pants with belt, two gloves and a yellow long-sleeve shirt size large.”

The YCSO report, however, includes MacKenzie’s cellphone as evidence. But the more important Canon camera that includes the two videos of conversations between Marsh and Steed is not included in YCSO evidence.

MacKenzie’s Canon camera was sent to his father, Mike MacKenzie, sometime before July 13, according to a Sept. 28, 2013 story in the Courier. Mike MacKenzie was surprised to discover it was still functioning, the paper reported.

Mike MacKenzie reportedly made a copy of the photographs and videos and provided them to Prescott Wildlands Division Chief Darrell Willis on July 13 during his son’s funeral services, according to the Prescott Courier. Willis supervised the Granite Mountain crew. Willis, who has since retired, said he gave a CD with the photos and videos to the SAIT. 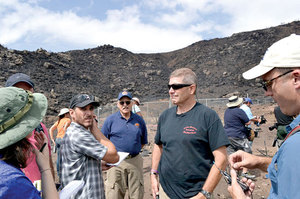 The photos and videos do not appear in the formal, 122-page Serious Accident Investigation Report (SAIR) that was released to the families and public on Sept. 28, 2013. Instead, they are among thousands of pages of supporting documents to the SAIR that were released to the media in December 2013.

The SAIR does not mention the two videos that suggest there was a disagreement between Marsh and Steed. The two nine-second videos were taken about 4 p.m. on June 30. Steed appears in the video talking to Marsh, who is in another location. Eleven of the hotshots appear in the video.

“I was just saying, I knew this was coming when I called you and asked what your comfort level was,” Marsh says to Steed in the first short video. “I could just feel it, you know.”

The second clip begins with Marsh ending a sentence with “…saying you know, (unintelligible).” Steed replies, “I copy, and it’s (the fire) almost made it to that two-track road that we walked in on.”

Brendan McDonough, the sole surviving Granite Mountain Hotshot, reportedly told Willis last year that there was a heated disagreement between Steed and Marsh about moving the crew. Willis informed Prescott town attorney Jon Paladini about what McDonough said, according to a story published in the Arizona Republic. Steed did not want the crew to leave its safe zone, but subsequently relented to Marsh’s order, according to the account provided by Paladini.

McDonough later denied saying what Paladini told the paper. McDonough has never provided sworn testimony about what he heard over the crew’s radio channel in the moments leading up to their deaths.

The SAIR concluded that no one did anything wrong despite the fact 19 men died in a box canyon that wild land firefighters know are deathtraps. The report states there was lack of communications between Granite Mountain and fire supervisors in the 33 minutes leading up to their desperate call for help at about 4:37 p.m.

“There is much that cannot be known about the crew’s decisions and actions prior to their entrapment and fire shelter deployment around (4:42 p.m.).” (Emphasis included in report.)

The report also stated investigators had “no indication that anyone asked them to move and does not know for certain why they moved.”

InvestigativeMEDIA filed a request for the autopsy reports under the Arizona Public Records Law in October, more than two years after Polk issued an unusual letter refusing to release the autopsy records citing privacy concerns.

“Therefore, absent a court order, these items will not be released,” Polk stated in an Aug. 26, 2013 letter sent to news organizations.

By the time the autopsy reports were released, 12 of 13 wrongful death lawsuits filed by the families of the deceased hotshots against the state Forestry Division and the Central Yavapai (County) Fire District had been settled. A court dismissed the 13th suit last summer. The settlement called for the 12 families  to each receive $50,000 and the seven other families each received $10,000.

The state Forestry Division admitted to no wrongdoing.